Today the parish close of Saint-Servais is dominated by the figure of Yan’ Dargent (1824-1899), a native of the area who made his career as a painter and illustrator in Paris whilst always remaining very attached to his birthplace. The interior of the church and the ossuary became the showcase for several of his works (paintings and stained-glass), some he created specially for Saint-Servais and others which were acquired after his death.

Seen from the exterior, where the presence of Yan’ Dargent is limited to a humble white tomb, the parish close of Saint-Servais reminds us primarily of the efforts of generations in the 17th century to construct a church from what was at the beginning no more than a simple chapel of Plounéventer, dedicated to Saint Servais, bishop of Maastricht. In those prosperous times they were able to erect a bell-tower with a double gallery suited to the Léon area’s taste.

Then they restored the calvary, lengthened the choir and constructed an ossuary (1643) whose door has a remarkable design mixing Renaissance motifs – interlaced patterns, spindle-shaped ornament, grotesques – with the first Baroque cherubs. The region got poorer in the 18th century, so they had to be satisfied with a modest porch (1749)… and await Yan’ Dargent for the interior decoration of the church and ossuary.

The painter would respond willingly to the rector’s appeal, through family piety out of regard for his mother who died when he was only two years old and doubtless also through attachment to the place where he had discovered a fascinating legendary world, that of Ankou and the Washerwomen of the Night, and the whole Age of Saints. He pushed this romantic attachment to the past up to the point of anachronism in asking that after his death his head should be preserved separately in a skull box … as had been done earlier for his mother and his uncle, but the custom had not then been practised in the region for a good half-century. The request was honoured, not without difficulty, in 1907. 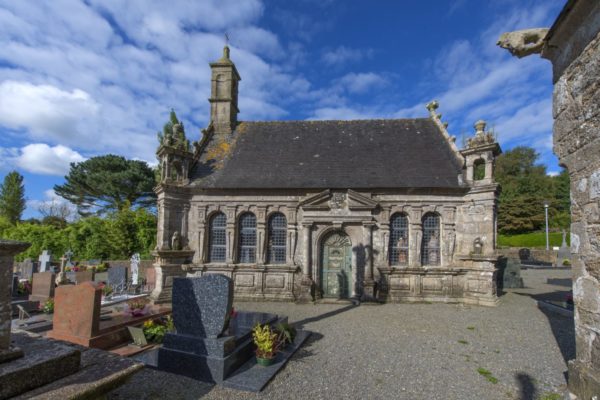 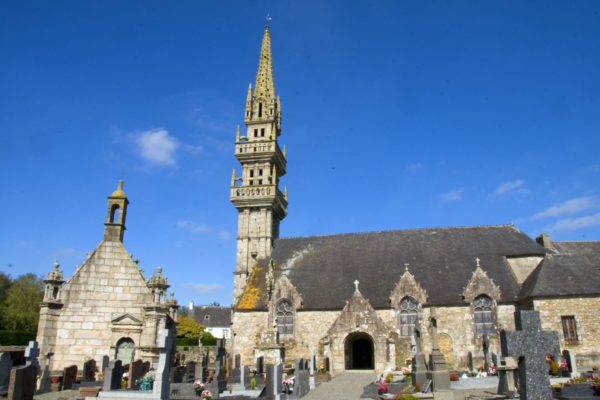