Sizun parish close THE TRIUMPHAL ARCH AND THE SIREN

An entrance way which became a veritable triumphal arch in classical style, crowned by a balustrade and calvary… and then just next to it, a siren – or rather a female serpent – which looks down on the square from the corner of the ossuary. The parish close at Sizun constantly shifts between solemnity and fantasy, which sometimes borders on the bizarre.

The solemnity arises first of all from the triple arch, closed in by two stone stiles (called échaliers) and formerly a central ironwork gate, to protect access to the sacred space which was also the place of the dead. Following the example of Berven, the parish used the workshop of Kerjean, with its dazzling mastery shown in the finesse of capitals in kersanton. On the reddish façade of the ossuary (1585-88), the patron of the parish, Saint Suliau, leads a grave and unusual cortege of apostles, also of solemn appearance with their almost Assyrian-style beards.

Dominating the church, the great bell-tower has the nobility of a worthy heir of Kreisker : it is the last of its line, by its date (1728-1735) as well as by its location at the southern limit of Léon. The sacristy itself is imposing with its elegant hull-shaped roof (about 1700). The interior of the church does not belie this theatrical refinement, which culminates in a vast raised choir, balancing the painted organ case.

And yet Sizun also reaches the most untrammelled exuberance in the extraordinary Renaissance decor in the niches of the ossuary (1585-1588) : high-based caryatids, interlaced patterns, strange masks, a naked woman holding a rolled-up scroll all revealing the extreme freedom of the sculptor in relation to his models. And what life in the exterior details : a dog and cat run down the kersanton of the Gothic porch, several griffins, a lion and three sirens sit in different corners of the church. The bestiary also enriches the stone frieze which runs along the chevet, and whose inspiration closely recalls the string-beams : everyday animals, monstrous creatures and fantastic masks. 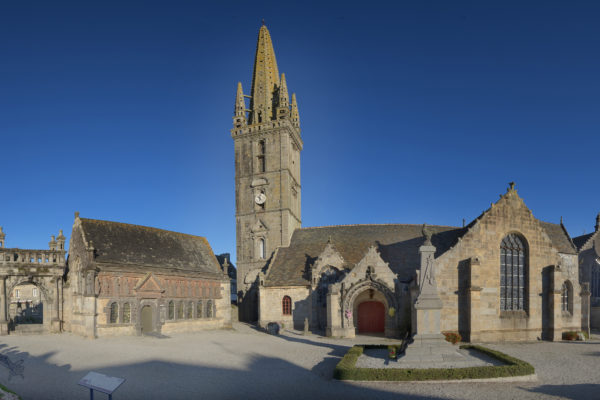