every day from 08.30 to 17.00
On site parking
No restaurant nearby
Disabled access
Toilets

Beneath the modest exterior of a small village which was formerly only a religious dependency (annex) of Sizun, Locmélar also bears the mark of rich peasant-merchants of cloth : for example, Jacques Soubigou, whose will of 1692 reveals business ties with Josselin, Moncontour and Rennes. To express a sense of achievement and celebrate its patron saint, the close employs the same language as its prestigious neighbours, whilst still knowing how to adapt this to its own scale ; and in this sense it is certainly even more moving.

The overall view from the main square gives an accurate picture : here everything is exactly proportioned to the space, from the spire of the bell-tower to the miniature sacristy whose hull-shaped roof imitates its model, Sizun. Since the demolition of the little ossuary in 1920, the ethereal profile of the calvary (about 1600) stands out against the valley background. The two crossing pieces, in something of a challenge to balance, at the same time bear Christ, the two robbers, the horsemen, four double-sided statues, a Pieta and young prince Mélar.

Successful realisation is due to the sculptor, who would go on to create the great calvary of Plougastel-Daoulas a little later. Beside it, a little Renaissance porch (1664) excels in the delicate note of reduction in scale : banded columns and pediment, apostles and their niches, ogive vaulting and traces of ochre yellows and reds, stone benches for the local worthies … everything here is in proportion to the place.

The interior of the church extends the charm. The baptismal fonts and ancient processional banners indicate autonomy from religious dependency, a status obtained by the inhabitants in 1612. The entire choir is covered by three altarpieces of great richness. That of the main altar (about 1675) indeed celebrates the Eucharist but equally the life and martyrdom of Saint Mélar, because the parish had just obtained the relics of a child with an artificial silver limb. If the term “peasant Baroque” has a meaning it is perhaps here in the inimitable taste of the altarpiece of Saint Hervé and the chubby cherubs of the blue vaulted ceiling. 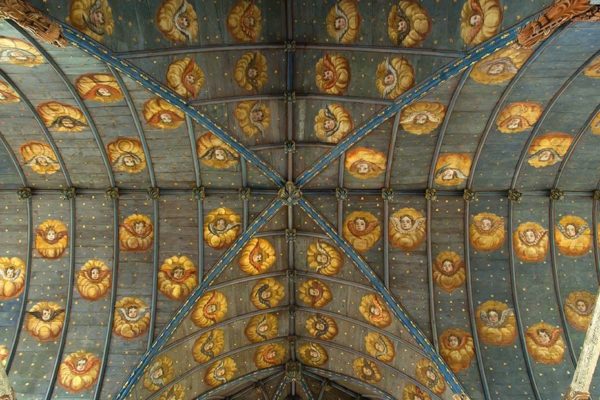 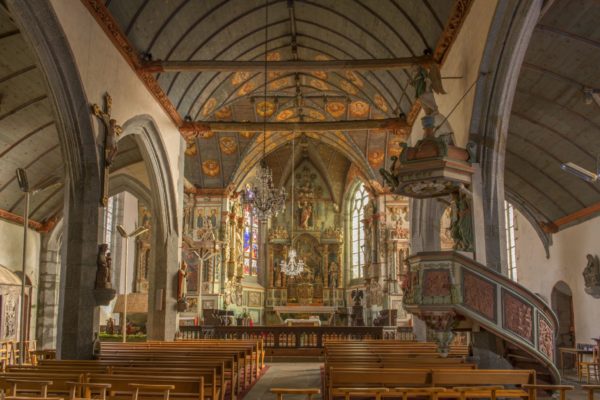