every day from 09.00 to 19.00
On site parking
Restaurant nearby
No disabled access
Toilets

We are at the foot of the most highly situated bell-tower in Brittany. The pinnacle reaches a level of more than 300m, not far off the height of the crests of the Monts d’Arrée, and it fits there well by virtue of its deliberate severity, without balustrade or smaller decorative towers (1529). The powerful stonework of the walls, the rustic monumental gate and the sober façade of the ossuary (1677-1687) give off the same sense of force ; a force which is born of simple lines and the quality of materials extracted from nearby quarries, the heavy slate of the mountain and the hard granite of Plouneour-Menez.

The only concession to ornamentation seems to be the small stone lantern crowning the remarkable porch (1645-1653). But the exclusive use of granite again limits the decorative possibilities here : kersanton is restricted to two Corinthian capitals and three statues (Joseph, Mary and, at the top, Saint Derrien, patron of the parish). The architecture could not be shown off better than in the strictness of its outline.

In the interior, the empty niches make the best of the absence – no doubt original – of statues of the apostles. The ensemble bears the hand of a master : Roland Doré, if this is the interpretation of the series of letters : DRHMF (Doré hoc monumentum fecit). In any case, Doré signed one of the two calvaries (1624).

And yet this church with its harsh exterior offers a Baroque contrast in housing the most spectacular wooden altarpiece in all of Brittany. Eight metres wide and six metres high, the red, brown and gilt woodwork of the altar of Saint Anne (1682) is exceptionally munificent. Also out of the ordinary are the canopy of the baptismal fonts (1683) and the altarpiece of the Five Wounds of Christ. The technical perfection of the first (with very elongated female figures) and the almost profane exuberance of the second are certainly in the style of the sculptors of the French Royal Navy of Brest, who willingly offered their talent between naval constructions, in the service of wealthy cloth-producing parishes. 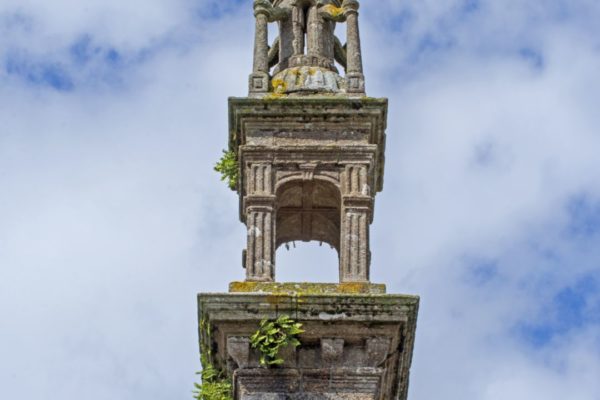 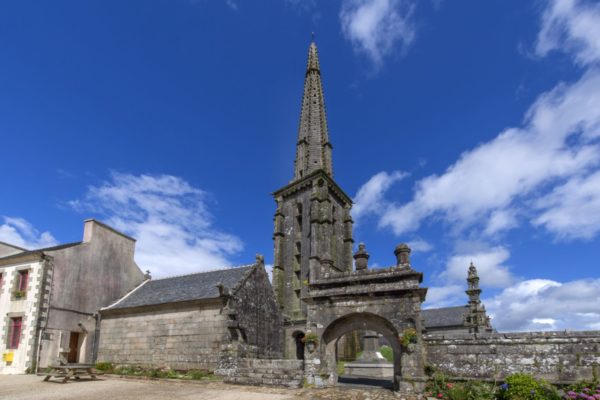